about me - Sam Barrow

Harmony and serenity is my natural way of communicating and photography is my way of freely interpreting the voice of the Earth—a voice that to me seems infinite, wise and gentle yet only exists in the perfect now, never in the past. It’s a voice impossible for me to ignore. It is one of my greatest excitements to interpret the earth’s brilliant organisational intelligence in a way that reminds us of the importance of quieting the analytical mind in awakening to true beauty and simplicity—a process I believe that can only be experienced and remembered, not learned.

The dance of embedded light and geometry that interlocks and supports all energy and thought forms everywhere, from the sub-atomic to the inter-galactic, sits and waits to surprise and support anyone with the eyes to see. I have found that in gently contemplating such relationships in the landscape and sky, one of many pathways to powerful awakening (remembering) can be gracefully opened without the need for technique or complication.

I invite you to take a swim in the current of remembering that flows beneath your feet, in the air that you breathe and in the stars above, for herein lie magnificent ‘secrets’ hiding in plain site that have the potential to help illuminate the memories that are right for you. In taking this swim you have nothing to understand. There is nothing to do, say, analyse or figure out—only feel. This is remembering. Rest easy in this knowing.

…I was born in Christchurch and currently live and work in the Canterbury region as an engineering geologist and art photographer. It is the landscapes of the South Island of New Zealand to which I am most powerfully drawn to make my photographic interpretations, especially in the Central Otago, Canterbury and Banks Peninsula areas.

I photograph predominantly in low light, always guided strongly by intuition and waiting for highly charged atmospheres. I often slow the shutter speed while using a variety of other in- and out-of-camera techniques to emphasise proportion and placement over decoration.

I find that in nurturing and honoring my personal subtle connection with a location rather than attempting to document the environment on first appearances, the earth is more inclined to quietly speak what she most needs us to hear, hinting at a mysterious and vital present moment full of extra-sensory earthly colours, textures and a spatial depth that lie just behind what normally meets the eye. A Between World is thereby unveiled⎯a world that is in fact much closer to true reality than our everyday third-dimensional illusory experience would have us believe.

Remembering for the Whole

Sam Barrow was born in Christchurch, New Zealand in 1974 and grew up never too far from the sea and mountains of his homeland in the South Island. Today Sam works as a fine-art photographer and also as an engineering geologist in the rebuilding of Christchurch after the devastating 2010/2011 earthquakes. His formal study and background lie in the earth sciences but he has also studied landscape architecture, music and publishing.

Sam captures the vitality of his country’s natural environment through pristine digital photographs. He draws from his interests in jazz piano, architecture, and geology to create ethereal compositions that blur the distinctions between heaven and earth. His works are not documentations of place, but rather renderings of the incorporeal mysteries inscribed in landscapes. Working intuitively, he transmutes the intangible spirituality of the terrain into atmospheric photographs that reveal a universe more dynamic and alive than our daily experiences allow us to perceive.

Sam primarily seeks to gently impress a little cosmic order, mystery and quietude onto a nonsensical and harsh world he often describes as being too loud, too bright, too fast and too tight.

Sam has been selected as one of the 2018 ATIMS Top 60 Masters of Contemporary Art presented by ArtTour International Magazine in recognition of excellence in art and creativity as well as Top 5 Photographer for 2018.

His creative portraiture work has been recognized by Circle Foundation for the Arts for its originality and uniqueness, remarkable aesthetics, and high technical and creative standard.

As well as a permanent display in Christchurch at Windsor Gallery, Sam’s work will be exhibited in New York in 2018 and Italy in 2017 and 2018, with shows in other cities planned.

Other photographic projects being worked on include a series of creative portraits, which are intended to further develop the subtle incorporeal themes and aesthetics present in his landscape work, while also highlighting the importance of self-remembrance and personal responsibility in moving towards a truly compassionate and inclusive global community in the widest possible sense. 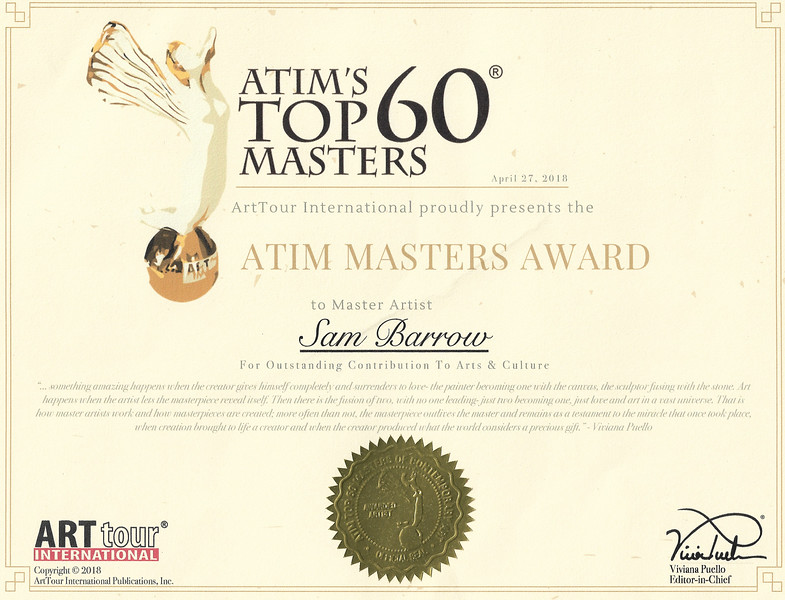